The labial or lingual frenum is a small muscle, covered with a mucous membrane that attaches the lips and tongue to the jaw bones.

This congenital (genetic) condition affects about 5% of the population and is more common in boys than in girls. 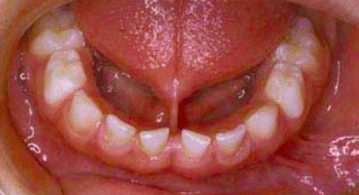 For infants, a short lingual frenum may cause breastfeeding difficulties Speech disorders may also result from an abnormal lingual frenulum, especially for sounds “S”, “R” and “TH”. A frenum that attaches too close to the edge of the gums can cause gum recession and bone loss.

Most of the time, the upper labial frenum is the cause of an interdental space between the upper
incisors (diastema).

It is sometimes said to “cut” the frenum. However, if orthodontics is considered, it is best to close the gap before the frenectomy to prevent the formation of scar tissue between the incisors, which would tend to favor a reopening of the previously closed space.

Frenectomy is a minor procedure performed under local anesthesia. It is important to follow post-operative instructions after the procedure to avoid any reattachment of the frenum.

Email: Email For An Appointment